Did you know that Veterans Day was originally called Armistice Day? On November 11, 1918, after more than four bloody years of fighting, World War 1 ended. German officials surrendered and the Armistice agreement took effect at 11:00 a.m. on 11-11-1918. That date – called Remembrance Day in many countries – was observed in the United States until 1954, when the name was changed to Veterans Day so that veterans of all wars would be honored. 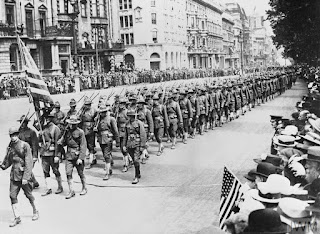 When the First World War began overseas in August 1914, President Wilson refused to involve America in a conflict that didn’t directly involve the United States. Many people in America and, indeed, Great Britain, believed that Wilson should have declared war on the Central Powers (Germany, Austria-Hungary and their allies) after a German submarine sank the RMS Lusitania, a British-owned luxury liner, on May 7, 1915, killing 1,200 men, women and children, including 128 American citizens. Wilson refused to budge. However, he began to change his mind when German U-boats (submarines) attacked American ships, and German spy networks detonated numerous bombs and incendiary devices on American soil. The final blow came when a letter to the Mexican president was intercepted and taken to the White House. The letter’s contents were shocking: the German government offered to assist Mexico with invading America to take back the border states of Texas, Arizona, and New Mexico. They also proposed that Mexico convince the Japanese to switch sides and join the Central Powers.

Within days, Wilson declared war on the Central Powers in April of 1917, more than 2-1/2 years after the war had begun. By the time the Germans surrendered, the war had claimed over 18 million lives, with an additional 23 million wounded (including civilians). 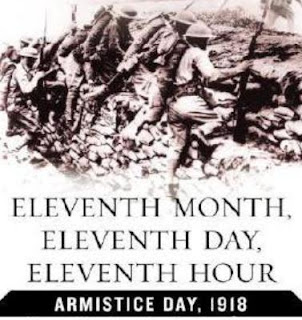 The official peace agreement, The Treaty of Versailles, wasn’t signed until June 1919, after months of meetings, arguments, and negotiations between the representatives of the conquering nations regarding how the countries that made up the Central Powers should be punished. An interesting fact is that representatives from the Central Powers – most importantly, the Germans – weren’t included in the actual peace negotiations in France. When the dust settled, the Germans were fined a half-trillion dollars (in today’s currency), a monumental debt that wasn’t paid off until 2010. The war devastated Germany economically. The people were impoverished, starving, and humiliated. Germany was seriously in debt, not to mention that they had lost millions of young men. In addition, they had lost face and a great deal of territory. 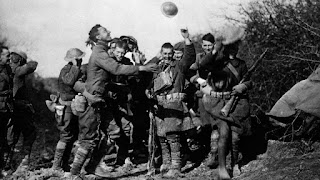 Forced to sign the Armistice agreement, Germany was humiliated, their economy ruined, and millions of their young men were dead.  Kaiser Wilhelm, grandson of Queen Victoria, had been at the helm during the war. He resigned his position as leader of the German Empire and spent the rest of his life exiled in the Netherlands.

These factors contributed directly to Adolph Hitler’s rise to power. He used the devastating reparations the Germans would have to pay to ignite the fuse of hatred that would lead to World War II less than twenty years later.

Posted by Colleen's Posts at 4:49 PM No comments: