If you have even the slightest interest in President Lincoln, you absolutely have to head to Springfield, Illinois. Springfield is a good-sized city (actually, it’s the capitol of the state), and there are a lot of restaurants, hotels, etc. There are lots of beautiful neighborhoods, containing large traditional homes, sprawling lawns, and perfectly manicured gardens.

But THE neighborhood that is a must-see is the one where Abraham and Mary Lincoln lived. The Lincolns lived in this home for a little over a decade before moving to the White House when Lincoln took office in 1861. The thing that surprised me was that it wasn’t huge, nor was it grandiose. In fact, to the contrary, it was far more modest than you would expect, especially since Lincoln was a lawyer, a Illinois Representative many times, and then a U. S. Representative prior to his election to the presidency.

Here’s the thing that puzzles me. Mary Todd married Abraham, who wasn’t exactly a good-looking man, right? When she was growing up in Lexington, Kentucky, before they were married, she was considered a really attractive young lady and a real social butterfly. Plus, her father was wealthy, and the house in Lexington was large and lovely (please see the earlier entry from Lexington for photos). So, she marries this homely guy with very little money, and moves into a not-so-wonderful house for years before he becomes president. Hum…. I’ve been trying to figure out why she would do that! There was no way she could know he would become President of the United States. What do you think?

Anyway, the Lincoln’s neighborhood is a historic district containing about a dozen restored houses on streets that aren’t open to traffic. Walk from house to house, tour them, and learn their history. It’s a great way to spend an hour or two. There’s also a Visitor’s Center with gift items and a few displays.

In addition, there’s a Lincoln Museum/Library downtown if you want to see more of the Lincolns’ personal affects. We skipped it, as we were running out of time, and we wanted to get up the hill to the Lincoln Memorial at the Springfield Cemetery.

The huge memorial wasn’t built for quite a few years after Lincoln’s assassination. After it was completed in 1874, Lincoln’s body was removed from the temporary crypt that had been built on a nearby hill. His casket was placed in the room beneath the memorial, where it sat for a number of years. In fact, there was a plot to steal Lincoln’s body, though the robbers were caught before they completed their grisly deed.

Eventually, Abraham, Mary, and three of their four sons were entombed within the memorial. It’s magnificent and well worth a visit.

Meanwhile, back at the RV park, there weren’t many other people there, except for a few permanent residents (who live in their trailers). But the motorhome parked across from us had the prettiest paint job I’ve ever seen. Take a look at the photos I took and notice that the swirl patterns change color, depending on the direction from which I’m taking the shot. Purple, then green, then brilliant turquoise, then nearly tan/gold. Rick said this is one of the most expensive paints ever made, and I can see why. It seems crazy to spend that kind of money on RV paint, since RVs are constantly getting dinged by rocks and debris on roadways, scraped by trees and bushes, get filthy dirty in dusty and/or muddy campgrounds, etc., etc. And yet, that paint was mesmerizing!


Posted by Colleen's Posts at 5:56 AM No comments:

Having been a car racing fan since 1954, Indy has always been near the top of my “bucket list”. Since Indianapolis was on our route home from Ohio, I wanted to visit the track, race or not. We got there in the early afternoon and got into a huge crowd of young farmers…there was a FFA convention at the fairgrounds that weekend and the track was overrun. We hopped on a tour bus, took a ride around the track, stopped at the yard of bricks at the finish line and toured the garages, the pagoda, the press room ( huuuuuggge ! ) and back to the museum. It was full of cars that won at the track and raced around the world. One of the cars, a Mercedes Benz W196 streamlined was the first race car that caught my interest in 1954 and started my fascination with racing, aerodynamics, et al. It is even more amazing in person than in pictures. Way ahead of it’s time! The track is so huge that you could fit Vatican City, the Coliseum, the Rose Bowl, All of Wimbledon and more inside it with room to spare. Frankly, the track is too big. The racing is boring and you really can only see a little of the track from most seats. The tradition and lore are better than the reality.

On the way to the RV park, which happened to be the State Fair Grounds in Indy, we ended up on some narrow residential streets. A Salvation Army truck was parked at the curb, but it’s mirror hung over into the second lane, and on my left was a Honda pilot too close for me to move over. Our right mirror hit the Salvation Army truck's left mirror, destroying both. After stopping and exchanging info., we crawled our way back to the fairgrounds and RV campground. After disassembling the mirror and finding out what parts I needed to fix it, the search began. Dozens of phone calls and running around later, I found a local dealer that could order the parts from Wisconsin and have them in by Saturday noon. $ 250 and a day later, I had my parts and set about repairing the mirror. We would be ready to take off Sunday morning.

On going out to the Honda to get some parts and other stuff, I found the right front tire flat. Wunnerful! So, I had to put on the goofy spare and go get parts and find someone to fix the tire. I was directed to a tire repair store not far away. It was in a very bad part of town and I was the only Caucasian in sight. I got the tire plugged, paid my bill and got the heck out of there, asap.

Finally, Sunday morning and Indianapolis is in our rear view mirrors !!! It will be a long time before I return there ! 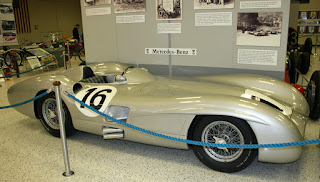 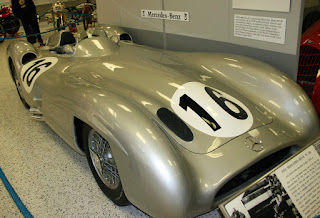 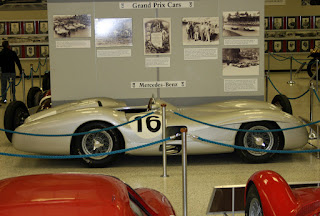 Posted by Colleen's Posts at 7:25 PM No comments:

DAYTON – Home of flight and aviation.


Where the Wright brothers developed their first powered airplane, Wright-Patterson Air Force Base is home to the US Air Force and the Air Force Museum. This is a huge facility with an Imax theater on the front, 3 enormous hangers full of historical airplanes and weapons and a huge silo at the back populated with full sized rockets. Starting with the first biplane all the way up to the latest F-22 fighter, it is a walk through history. The aircraft industry in the USA provided a lot of jobs for lots of people across the nation, including me. I worked for Lockheed from 1962 thru 1971 with a break for college.

The history of amazing technological advancement there is stunning. Unfortunately, so is the fact that we, as a nation, have produced the most efficient machines and weapons for killing other people in the history of the planet. Necessary during WWII, fear and greed hav driven most of the development since then.  Eisenhower was right .. "beware the military-industiral complex !"  I’m afraid that in 50 or 100 years, history won’t treat us too well, recognizing us as the most violent society of our times… The technological advances are great; the weapons are not. I think the money would have been better spent on helping the people that needed it in our country and worldwide.


Posted by Colleen's Posts at 6:33 AM No comments: