Mata Hari. The very name conjures images of a beautiful temptress; a double agent who betrayed the Allied forces during World War 1 costing the French countless lives. But who was the real Mata Hari? Was she actually the evil seductress remembered as a counter agent during the Great War? And did she really change her allegiance to the Allies (Russia, France, Britain, Serbia, Japan and Italy) to spy for Germany?

During the early 1900s, Mata Hari was a famous exotic dancer. She advertised herself as a princess from Indonesia, and world audiences bought into her ruse. Her scanty costumes left little to the imagination, and her gyrations shocked, and yet titillated her audiences…which included the era’s most rich and famous, as well as royalty.

Mata Hari’s real name was Margaretha Zelle, and she wasn’t a princess, nor was she from an exotic country. Actually, she was born in the Netherlands, and her father owned a hat shop.
After a tumultuous childhood, Margaretha moved to Indonesia and married a well-to-do widower, who was 20 years her senior. He was well-off financially and was a high-ranking officer in the British military. But he was an alcoholic, and he often beat her.

Margaretha’s life was made even worse when both of their children died of what was believed to be syphilis. She found solace in learning Indonesian dances. So, when she found herself divorced and on her own, she changed her name to Mata Hari, which means “eye of the day” in Indonesian. Fabricating a fake past, she performed her sensational dances.
When the war broke out in 1914, she was on tour in Europe and fell madly in love with a Russian pilot who flew for the French. When he was shot down during a dog fight, he was badly injured. Margaretha tried to visit him in a military hospital in France. But the French would only allow it if she agreed to spy on Germany, or more exactly, seduce the eldest son of Kaiser Wilhelm II, who had been infatuated with her when she performed in Germany. The French military wanted her to get information out of the young German prince and pass it on to them. 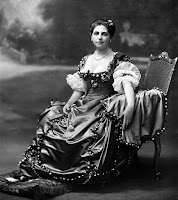 Did she become a counterspy during her few years of working undercover for France? Or was she set up by a German officer with whom she had a relationship? A rejected lover, perhaps? All we know is that he sent a coded message indicating that Mata Hari was spying for Germany – and he sent it in a code that he knew could be easily deciphered by the French.  Mata Hari was arrested and executed in France in 1917. She swore she was innocent until the end.
Most scholars who have reviewed the trial documents believe she was simply made a scape goat by the French government. After all, it was convenient to blame her for the fact that the French had lost a major battle, rather acknowledging that poor tactics had been used by the French commanders. 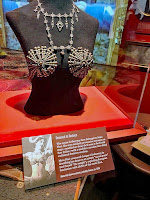 The new International Spy Museum in Washington, D.C. has an exhibit about Mata Hari which includes some of her personal possessions, such as the metal bra top she wore as part of her dance costume.

Images from Wiki Commons Public Domain
Posted by Colleen's Posts at 10:05 PM No comments: Links to this post